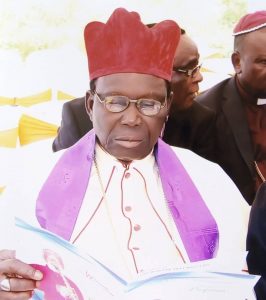 THE ENIGMA BEHIND HIS BIRTH

Archbishop Dr C.T.S Onuorah was born in 1940 at Assumption’s Catholic Church Nimo, a town located in Njikoka Local Government area of Anambra State of Nigeria-West Africa. His biological mother Mrs. Agnes Nwaezelu (Nee Adogu) was a Roman Catholic before the exchange of nuptial vow traversed her to the Anglican home. While she was pregnant and almost due, her mother sent her on errand to the church to deliver an urgent message to the Catechist, on arrival, the holy mass was already on, while the white priest was the officiating priest, hence, she opted to join the congregation as she awaits the catechist who also was in church for the celebration of the holy mass. As the holy mass was being celebrated, labour emerged with its usual severe painful symptoms, Mrs. Agnes felt the cramp within the lower part of her belly, of course she knew she has gone into labour, she tried to leave the church in order not to distract the attention of the congregation but couldn’t as her ordeal caught the attention of some women seated around her, they too endeavoured to help her move away from the congregation and out of the church so that there won’t be distraction in the holy mass but all their efforts proved abortive. A cubicle was formed by the women, as they willingly volunteered their wrappers; right inside the church. In no many minutes, Erico was delivered of a bouncing baby boy under the auspices of some Reverend Sisters who also noticed her plight, and those volunteers who had earlier willingly volunteered each of the different wrappers every one of them were wearing. The baby was eventually handed to the white priest, who in turns named him ‘’Sunday’’ and declared that he is going to be a great prophet owing to the mystery behind his birth.

Archbishop Christopher Tobechukwu Sunday Onuorah was the last born of Mr. and Mrs. Anthony Okafor Onuorah of blessed memories and as well the only survival son out of the two others who died earlier. His elder and only sister was given out in marriage quite early in life by the relatives after the untimely death of their father.

His father died while he was barely eight years of age but God’s grace and mercy saw him through in life. As a child growing up, his mother took into cognizance, his major hubby which was the sanctification of water for people and this act, attracted the attention of most elderly village women who also did not cease from bringing along, buckets of water for him to consecrate despite the strong yelling and warnings which their various children home and abroad do issue any time they return to the village because they considered him merely a child and the act, a childish behaviour.

Archbishop C.T.S spent major part of his youthful age as an evangelist. This eventually, took him to different places within the terrain of the country. The zeal was quite intense; his love for God was indisputable. His spiritually-focused mind was not a barrier to him in participating in the politics of his people as he once aspired, contested and won membership of the state house of Assembly in 1979, under the platform of People Redemption Party (P.R.P) to represent his constituency at the state level but was denied such privilege when his opponent bought over the position. He remained a great orator and his ever bold nature offered him an ample opportunity above his contemporaries and folks. No wonder, he was mostly called upon to speak up for the voiceless among his people and beyond.

He attended Saint Michael Primary School, Aba, between late forties and in the early fifties (in the present day Abia State) in the former Eastern Region, while he had his secondary education at Government College Umudike, in Umuahia in the fifties (in the present day Abia State) still in the former Eastern Region. He attended School of Theology Santa Isabella in the early sixties. His other accolades include; California Christian University, USA and Trinity College and University, Delaware, USA, where he bagged the certificates: CED, and PH.D respectively.

MISSIONARY JOURNEY (THE FULFILLMENT OF THE DECLARATION/PROPHECY)

As the popular adage goes: “charity begins at home’’, Archbishop (then Reverend) began his first missionary journey from his hometown. First, he destroyed “Akpam” as it was popularly called by its worshippers in 1961, an oracle in Nomu village which was perceived as being very dreadful and dangerous. This very act raised many eyebrows about the source of his power and he made it known on questioning by different villagers that Jesus Christ is super power and the only source of his power, that response gave him the popular nickname “power power” throughout the terrain of Enugwu-Agidi, his hometown. He commenced his missionary journey in 1965, at Azunmiri in former Eastern region the same year he was ordained as a pastor, although he was popularly called and referred to as Reverend or the true Prophet of Jesus Christ. As a teenager, he managed a small church in Nkalagu, in the present day Ebonyi State, although he got quite involved in the things of God from childhood days. The first foundation stone of Jesus Christ Healing Church was laid in 1973. 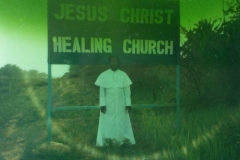 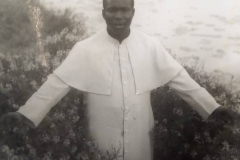 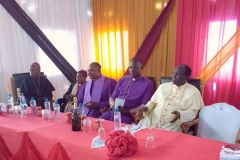 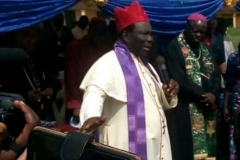 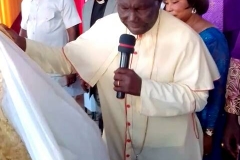 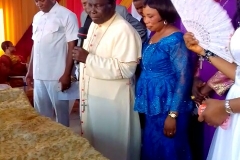 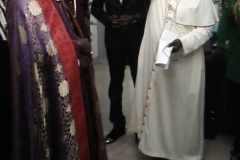 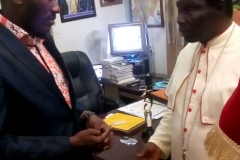 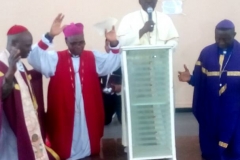 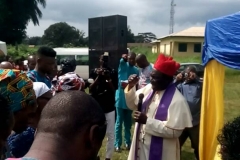 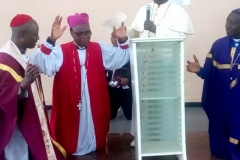 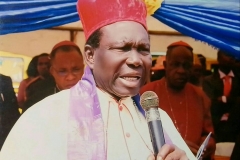 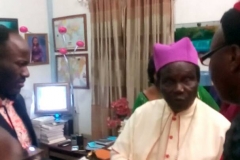 In the course of his missionary activities, he ministered before and after the Nigeria civil war in the following places:

Today, he is the founding father of many churches in Nigeria, including Holy Ghost Chapel. He laid the foundation of many branches of Holy Ghost chapel and left them at the care of his pastors. He was consecrated as a bishop in the early nineties, and became an archbishop in 2000.

His ministry is well known for Healing, Strong Evangelism, Vision, Prophecy, and Almsgiving.

He is the head of spiritual communion in Nigeria, the primate of Holy Ghost Chapel and the president, Association of Nigeria Bishops.

He was among the pioneers of Pentecostal movement in Nigeria. Notable in history, is the fact that he is one of the oldest pastors in the history of Nigeria Pentecostal churches. He was the head of spiritual communion for a long time.

He is the primate of Holy Ghost chapel, a church registered in Nigeria with various branches Nationwide. The religious organization has affected positively, the lives of many Christians within and across the Nigerian border through her evangelism, message of salvation, crusades, retreats and all kinds of episcopal work. The doctrine preached and practiced by the church is that of the Christian faith as contained in the Holy Bible.

He is the president of the association of Nigeria bishops and the chairman, board of trustees. The association has been in existence over the years but was officially registered in Nigeria, on the 26th of October, 2015. It is an umbrella encompassing most Nigeria bishops. The association aims at promoting unity, peace and brotherhood among Nigeria Bishops and beyond, creating a veritable forum for the exchange of ideas on matters which affect the welfare and development of churches in Nigeria, helping in the promotion of the welfare of the needy, the poor and the helpless, supporting the Government in upholding peace, unity and progress of Nigeria, and as well as building health facilities and educational institutions for sound and moral education of Nigerian children.

Archbishop Onuorah got married in 1980, to Mrs. Njideka Bridget Onuorah (nee Atuegbu) who also have a strong Christian background from the Roman Catholic denomination and a great lover of nature. She is very loving, caring, supportive, self-willed and very industrious. Their marriage is blessed with six children and both of them in their fervent Christian beliefs raised these children in Godly way. They were taught and brought up in wisdom, fear of God, humility and responsibility.

We, the member of Association of Nigeria Bishops a non for profit and non-political organization do firmly and solemnly resolve to provide for ourselves a constitution and to be governed by the provisions therein contained.